How Obama Is Failing Syria

How Obama Is Failing Syria 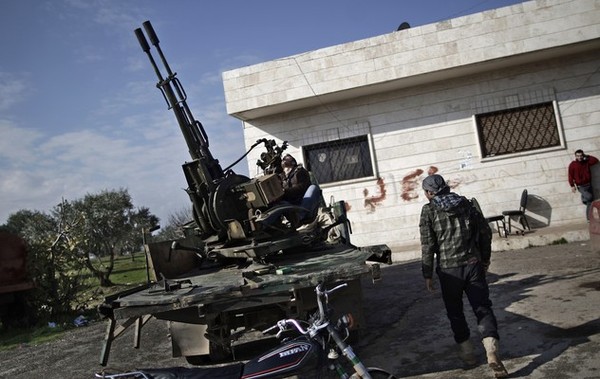 In the matter of the Syrian rebellion, the U.S. hasn’t even “led from behind.” The Obama administration has pioneered a new role for a great power: We are now the traffic controllers, directing the flow of weapons to the rebels.

The money isn’t ours; it is Qatari and Saudi and Libyan. The planes hauling the weapons are Jordanian, Qatari and Saudi. And the risks are run by Syria’s neighbors, principally Jordan, Turkey and Lebanon.

Our officials have opinions on Syria, but no one in the Greater Middle East can divine them. We want Bashar al-Assad gone -- our president said so in August 2011 -- a full five months into a brutal war. Then again, through winks and nods, we suggest that the alternative to Assad might be worse than his despotism.

No sooner do we make one definitive statement against the dictator than we hedge it with an invitation to both the dictatorship and the opposition to come to the negotiating table. Great crimes are committed by the Syrian regime, but we are full of worries about the jihadis who have converged on that country. For American officials, the lengths of the fighters’ beards, one Syrian opposition leader lamented, are more important than the massacres.

Barack Obama is a cool, cerebral man. It is his defining image. History won’t rush him or force his hand. If George W. Bush was the “decider,” his successor is the questioner who “wrestles” with decisions.

The ground burns in Syria, a strategically placed country on the Mediterranean, with explosive borders, that unravels before our eyes -- before his eyes. Yet a full two years into the slaughter, the questions keep coming.

“In a situation like Syria,” Obama said to the New Republic in January, “I have to ask, can we make a difference in that situation? Would a military intervention have an impact? How would it affect our ability to support troops who are still in Afghanistan? What would be the aftermath of our involvement on the ground? Could it trigger even worse violence or the use of chemical weapons? What offers the best prospect of a stable post-Assad regime? And how do I weigh tens of thousands who have been killed in Syria versus the tens of thousands who are currently being killed in the Congo?”

In truth, it isn’t the Congo that weighs on Obama’s Syrian policy. It is the specter of Iraq. The Iraq War is, of course, canonical to Obama. He was, blessedly for him, in the Illinois Legislature when the vote to authorize the use of force against Saddam Hussein was passed by the U.S. Senate.

There was a widespread sense of injury in the country when that vote was cast in 2002. Three of four Americans favored upending the Hussein regime.

Obama’s rise in national politics dovetailed with the American disappointment with the Iraq War. His was an easy task: He would make that politically useful distinction between the “war of choice” in Iraq and the “war of necessity” in Afghanistan.

He isn’t a pacifist, he would proclaim. He didn’t oppose all wars, only “stupid” ones. He made a solitary voyage as a presidential candidate to Iraq in July 2008. He came, he saw, and Iraq confirmed the verdict he had brought with him: The war had to be scaled down so that the troops would be there to sustain a bigger fight in Afghanistan. This wasn’t his war, and he envisaged a big drawdown in Iraq. He had his priorities. Afghanistan was the central front in the war on terrorism.

The war for Syria began in earnest in 2011, the year that the Obama administration was preparing for a full withdrawal from Iraq. Iraq was the prism through which Syria was seen. A great sectarian fault line ran through Syria between Sunnis and Alawites, and there was an ethnic Arab-Kurdish divide as well. This was evocative of Iraq.

As is the way often in searing historic conflicts, American officials overread the lessons of Iraq. In Iraq, the U.S. had rushed into war. In Syria, caution, paralyzing caution, would carry the day.

It was telling that the Libyan venture that toppled Muammar Qaddafi never emerged as a template for a new U.S. role in Arab- Islamic lands. The U.S. had done well by that conflict. A monstrous dictator was toppled, we had “led from behind”: The French and the British had taken the lead, and the U.S. had provided the logistical support. But there was no celebrating, and Obama let it be known that it had been a close call on Libya, that that conflict was sui generis and wouldn’t be repeated.

Secretary of State John Kerry made a surprise visit to Iraq last weekend to ask the Iraqi government that had been midwifed by American power to refrain from supporting the Syrian dictator. A corridor runs from Iran to Syria through Iraq, and the Shiite-led government in Baghdad has cast its lot with the Iran-Syria-Hezbollah axis. We had pulled up stakes in Iraq, and there was no residual American presence to shore up our authority.

“The tide of war is receding” has been the mantra of this administration. But in Syria, Iraq and that larger neighborhood, it is America’s power and writ that are eroding by the day.

Fouad Ajami is a senior fellow at the Stanford University’s Hoover Institution and author of “The Syrian Rebellion.”

This article originally appeared in Bloomberg on March 26, 2013. It is reprinted with permission from the Hoover Institution.