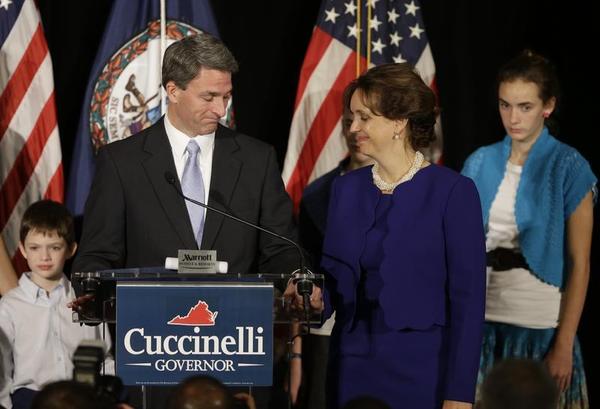 Early Tuesday night, it became clear that Republican Ken Cuccinelli was going to perform better in the Virginia gubernatorial race than most observers expected of him. A lot of very smart analysts have offered some smart takes on why this was the case.

The problem, as I noted previously, is that the question “Why did Ken Cuccinelli do so much better than expectations?” is not the one to ask. Or, more precisely, it is an incomplete question. The more pertinent query is “Why did Ken Cuccinelli do better than expected while the other two statewide Republicans did not?” In other words, any answer proffered has to explain both why he outperformed the polls by a little more than four points (net), while GOP lieutenant governor candidate E.W. Jackson outperformed those same polls by less than two points and attorney general candidate Mark Obenshain didn’t outperform them at all.

In other words, some of the more “global” suggestions that have been proffered -- a possible “hidden” evangelical vote, an error in the estimation of the electorate -- tend to fail this second prong of the test. So too does the observation that Terry McAuliffe’s internal polls showed a tighter race; we still need to explain why the public polls were substantially overestimating McAuliffe but not the other two Democrats. That doesn’t mean that these explanations are wrong, only that we have to keep looking for something that explains Cuccinelli’s unique improvement in the polls.

The simplest explanation is that more pollsters looked at the governor’s race than the other two contests, so it’s a bit of an apples-to-oranges comparison. But that doesn’t help much; if we look only at pollsters who took a stab at all three races, Obenshain actually ran behind the polling average.

Another possible explanation revolves around Libertarian candidate Rob Sarvis, who attracted three points less than his polling average. If those voters simply went over to Cuccinelli, it could explain almost all of the attorney general’s over-performance. This would also pass the second prong of our test, because there was no libertarian to factor in for down-ballot polling.

But this explanation is ultimately problematic (though still plausible). The problem is that much of the pre-election polling of Sarvis’ voter preference mirrored what the exit polling suggested; this in turn suggests there was no substantial change in the proportionate makeup of Sarvis’ voters.

Quinnipiac’s final poll showed McAuliffe up by six points and up seven with Sarvis out of the race. Similarly, the Washington Post poll found Sarvis pulling disproportionately from McAuliffe, although only slightly. In fairness, Christopher Newport University found that twice as many Sarvis voters said they’d vote for Cuccinelli over McAuliffe, although it found that a plurality of Sarvis voters would have stayed home rather than vote for either.

If Cuccinelli-leaning Sarvis voters had abandoned the libertarian at a disproportionately high rate, then the exits should have shown Sarvis’ voters heavily preferring McAuliffe. But the exits show roughly what the Post poll showed: A slight tilt toward McAuliffe. Had Sarvis exited, McAuliffe would have won by two points, rather than three.

Even if CNU had the better take on Sarvis’ voters, almost all of those who favored Cuccinelli in a two-way race would have had to abandon Sarvis to explain the swing, without any McAuliffe voters abandoning him. This seems unlikely. At best, the evidence here is conflicting, depending on which pre-election pollster you thought had the best read on Sarvis’ voters.

Another possibility is that the set of undecideds in the gubernatorial polls broke disproportionately for Cuccinelli. It’s also possible -- even likely -- that we have a different set of undecideds in gubernatorial polling than in the lieutenant governor or attorney general polling. But although the pollsters had quite a large divergence in the number of undecided voters that they found, there wasn’t much correlation between the number of undecideds and the size of McAuliffe’s lead, as we might expect if this were the case. The Washington Post poll had almost no undecideds and found a huge McAuliffe lead, while the Hampton University poll found 10 percent undecided while finding McAuliffe up by six, one of his weaker showings in the polls.

So what is my explanation? Obviously, what follows is all speculative, but it is at least consistent with what we saw in the polls up and down the ticket. It is also consistent with some of the other rationales we’ve explored above. Basically, I think what we see is the convergence of two factors. First, McAuliffe was winning a reasonable number of moderately right-of-center voters in the polls. Second, both Cuccinelli and McAuliffe had awfully high unfavorable ratings.

If you were a moderately right-of-center voter who was fed up with Cuccinelli and told pollsters you wouldn’t vote for him, it is possible that when you walked into the voting booth, partisanship took over. Maybe these voters just skipped the race, or maybe they voted Cuccinelli. Either way, the result would be the same: McAuliffe’s share drops from what the polls projected.

This would also explain why there was no accompanying drop-off for Democrats down-ballot. Ralph Northam was a pretty bland, faceless candidate for lieutenant governor; he was a generic Democrat and so turned off fewer of the center-right voters who were turned off by Bishop E.W. Jackson. Obenshain didn’t see any drop-off because these voters were probably voting specifically for him (who was something of “generic Republican” anyway).

A related explanation would parallel the “Shy Tory” factor, a reference to a phenomenon in British polling in the 1990s, when the Tories would routinely poll worse than their actual electoral showings. After some investigation, it was thought that voters were simply embarrassed to tell pollsters that they were voting for the Tories.

Was there a “Shy Cuccinelli” factor? Again, it’s impossible to know, but the explanation is at least consistent with what we saw both at the top of the ticket and down-ballot (people were not shy about supporting Obenshain, and really did oppose Jackson).

I’m sure other competing explanations will emerge, but I would point out one other thing in closing. If you use the “last-minute change of heart/shy Cuccinelli” explanation as a foundation, some of the other explanations dismissed above suddenly provide helpful context.

What we’re really hypothesizing is that McAuliffe’s support among moderately center-right voters was soft due to mutual dislike of both candidates. Northam’s support was firm since he didn’t cut a strong profile, and Obenshain’s was firm since he was perceived as a moderately center-right candidate. If that were the case, we would expect events like the rollout of Obamacare and the fading of the government shutdown to disproportionately affect McAuliffe, since his support was softer and thus more susceptible to changing environments. Similarly, this could explain Geoff Garin’s internal polling for McAuliffe: With more sophisticated survey techniques than public polls use, it might have been able to better identify weaknesses in McAuliffe’s support.

Sean Trende is senior elections analyst for RealClearPolitics. He is a co-author of the 2014 Almanac of American Politics and author of The Lost Majority. He can be reached at strende@realclearpolitics.com. Follow him on Twitter @SeanTrende.