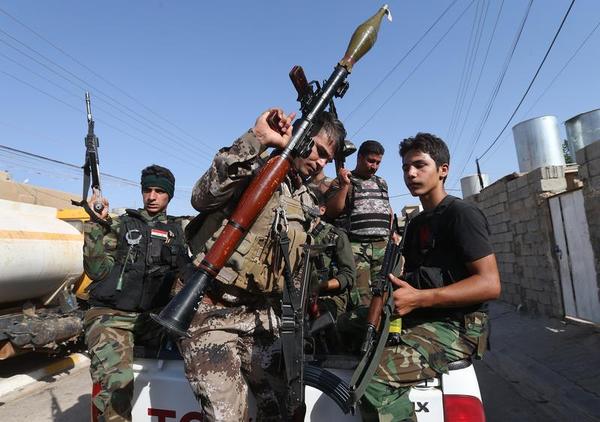 Sitting on the dusty ground in front of a group of men in balaclavas who are waving a black Islamist flag and chanting “There is no god but God”, the Iraqi officer, unshaven and dressed in a brown dishdasha, is resigned to his fate.

As one of the fighters shouts out jihadist slogans, the crowd begins to bay for blood and the officer, hands tied behind his back, sways nervously. Finally, the executioner lifts a foot-long knife.

The crowd shrieks as the officer’s head is swiftly severed and held aloft. A youth in an Arsenal shirt and with a Kalashnikov wanders in front of the camera. A cleric appears to be present. Later the video is posted on YouTube and jihadist websites.

According to the Islamic State in Iraq and al-Sham (Isis), the victim was an Iraqi army commander who had been captured and condemned after a sharia trial.

On Thursday another Isis video appeared. This one was entitled There is No Life Without Jihad. In it, two friends from Cardiff are seen speaking in English. “We will go to Iraq in a few days and we will fight there, Allah permitting,” one of them vows.

Both videos — one designed to terrorise Iraqi soldiers into submission, the other to lure impressionable recruits — were shared widely via Facebook and Twitter using the hashtag ‪#‎AllEyesOnIsis‬.

A mobile phone app called Dawn of Glad Tidings helps Isis to promote its Twitter feed and includes embedded advertising. Twitter is also used to supplement traditional fundraising methods, such as extortion, by encouraging Sunni donors in Saudi Arabia and the Gulf states to click on a link.

If Vietnam was the first television war, the conflict that has spread from Syria into Iraq is the first social media jihad.

Isis is using the internet as part of a sophisticated campaign that combines financial acumen, strategic patience and unspeakable brutality. When it declared last week that it had taken army prisoners, followers on Twitter hailed the achievement and called for them to be executed.

“Brother, you must behead them all and post pictures of their heads on Twitter for all to see, these are not times to be gentle or merciful,” one supporter tweeted.

Stephen Kappes, a former deputy director of the CIA, said last week at an event at the Centre for Strategic and International Studies that Isis was “capable of more violence and [was] more predatory than any terrorist group we’ve seen in the post-9/11 environment”.

He compared their leadership to that of the bolsheviks — “very dedicated, very committed, completely ruthless” and heading up what had now become a “terrorist army”.

A British fighter, Abdel-Majed Abdel Bary, a 23-year-old former rapper from Maida Vale in west London, is among those who have tweeted warnings of “blowback” from the conflict to the West, including Britain.
“The lions are coming for you filthy kuffs [infidels],” he wrote. “Beheadings in your own backyard soon.”

The situation is so dangerous that President Barack Obama has been forced to abandon his bumper-sticker campaign contention that he had “ended the war in Iraq” by withdrawing in 2011.

Setting aside his deep reluctance to let the United States risk being sucked into another war in the Middle East, he is sending 300 special forces troops to help prop up the Iraqi army.

This small US force will be split into 12 teams known as operational detachment alphas (ODAs), which will be embedded with the Iraqi army in headquarters in Baghdad and Kurdistan rather than on the ground.

More US surveillance aircraft are being flown over Iraq and 275 troops are being used to guard the American embassy in Baghdad.

The Pentagon has described a core element of their mission as “assessment” in preparation for what Obama called “targeted and precise military action” — code for airstrikes using missiles launched by ship, jet and drone.

While the Isis fighters probably number no more than a few thousand, their psychological operations have reinforced their strength. So has their willingness to consolidate ground taken in the Sunni bastions of Tikrit and Mosul while advancing towards Baghdad.

There will be no negotiating with Isis, said Kappes, who was a covert operative for nearly 30 years. It is “an evil force . . . They can only be stopped by force.”
_____

Although “the enemy of my enemy is my friend” is a proverb associated with the Arab world, it dates back almost 2,000 years to a Sanskrit treatise on statecraft. But it has been widely invoked in recent Middle Eastern history and after the Isis surge is being cited once again.

Now, the case in point is that of Iran. Tehran’s theocratic Shi’ite regime has been dismayed by the rise of Isis. It threatens not only President Bashar al-Assad of Syria, an ally of Iran, but also the Shi’ite majority in Iraq whose prime minister, Nouri al-Maliki, is viewed by some as a puppet of the mullahs.

Senator John McCain, the 2008 US Republican presidential nominee, told The Sunday Times that he suspected the Obama administration might seek to connect Iraq and the Iranian nuclear issue in talks with Tehran.

“I don’t think we should be dealing with them [Iran]. They were responsible for the most lethal kind of IEDs [improvised explosive devices] that killed many Americans in Iraq,” McCain said.

Kappes, who said he had "banged my head on the Iranian question for over 25 years", insisted that a line of communication with Iran was essential. “I’m not recommending joint US-Iranian operations but I am recommending contact,” he said.

Zalmay Khalilzad, a former US ambassador to Iraq who held talks with the Iranians during the Bush administration, said: “On some issues at a tactical level there can be room for co-operation.”

Almost McCain’s only point of agreement with the US administration is that Maliki should step down after his failure to bring Sunnis into his government, which helped helped create the conditions for Isis to gain popularity in Sunni areas.

Maliki has until August to form a government after the elections in April, but his chances diminished on Friday when Grand Ayatollah Ali al-Sistani called for “an effective government that enjoys broad national support, avoids past mistakes and opens new horizons”.

Sistani, 83, a revered Iranian-born cleric, had been known for his opposition to violence. But the Isis advance has prompted him to urge his followers to join militias. Shi’ites streamed towards Baghdad, where a basketball arena served as an impromptu recruiting centre.

Obama has implied that military assistance to Iraq depends on Maliki, or a successor, bringing moderate Sunnis into the government, thereby isolating Isis. But this is something the United States has tried to push Maliki to do for years.

Iran, whose forces are supporting Shi’ite militias in Iraq, is likely to have a big say in any replacement for Maliki. Ahmad Chalabi, a neoconservative favourite before the 2003 Iraq invasion but who was subsequently accused of being too close of Tehran, has emerged as a potential prime minister.

He held talks at his Baghdad estate last week with Robert Beecroft, the US ambassador to Iraq, and Brett McGurk, the State Department’s top Iraq official.

Another visitor to Chalabi’s estate was Qassem Suleimani, commander of the Iranian Revolutionary Guard’s elite Quds force, which has been operating with Assad’s forces in Syria. He has been described by McCain as “probably the most evil man on Earth”.

Francis Brooke, an aide to Chalabi in Washington, said: “He [Suleimani] came straight from Damascus. They discussed the military situation, where the Iraqi army stood, where the points of attack were and what measures they could take to do something about it.”

Iranian drones have been deployed and there is a joint operations room run by Iranians and Iraqi intelligence where Isis buildings and commanders are pinpointed.

An Iraqi official said the Iranians were sending Shi’ite militiamen to replace Sunni soldiers who had deserted in Mosul. “Suleimani is using them as firemen to plug the holes. Maliki has in effect relinquished to the Iranians his role as commander-in-chief,” he said.
_______

After its lightning gains in the Sunni heartlands of the northwest, Isis faced stiff resistance on the approaches to Baghdad as the Iraqi army and Shi’ite militias joined forces to protect the capital.

Obama’s decision to send in 300 special forces was seen by many as too little, too late. Aaron David Miller, a veteran Middle East negotiator, described it as “a minimalist approach designed to split the difference" between his risk aversion and political demands in Washington after the shock gains by Isis.

An NBC/Wall Street Journal poll showed that approval of the president’s foreign policy had slipped to an all-time low of 37% amid concerns about leadership.

A gradual de facto partition of Iraq seems likely with the Kurds, who took control of the disputed oil city of Kirkuk, moving towards independence. Iraq’s Shi’ite south will probably demand more autonomy — and get closer to Iran — leaving a “Sunnistan” that could be controlled by Isis, at least in the short term.

McCain said an Isis state would be the “largest terrorist safe haven in history” and “a direct threat to the United States”. Responsibility for this, he charged, lay with Obama for refusing to intervene decisively in Syria by arming moderate rebel forces.“We’re going to pay a very, very heavy price,” he said.

In London, security officials believe that as many as 250 fighters may already have returned from the region and could make Britain their next target. Tracking them accounts for most of MI5’s casework.

The White House insists it will act against Isis in Syria as well as Iraq if necessary but the downside is that this would strengthen Assad’s position. Appearing before Congress last week General Martin Dempsey, chairman of the joint chiefs of staff, and Chuck Hagel, the US defence secretary, made little attempt to put any gloss on the situation.

“Forces are intermingled,” Dempsey said. “It’s not as easy as looking at an iPhone video of a convoy and then immediately striking it.” In one case an Iraqi base was overrun by Isis and then retaken by Kurdish fighters all in the course of 36 hours.

Hagel blamed Maliki for the failure to reach an agreement on a residual US force after 2011. “Well, when we’re not there, we’re not there,” he said. “And, I mean, I don’t know what you would have expected the United States to do.”

Toby Harnden is the Washington bureau chief of The Sunday Times. You can follow him on Twitter here.

This article originally appeared in The Sunday Times. It is reprinted here with permission.