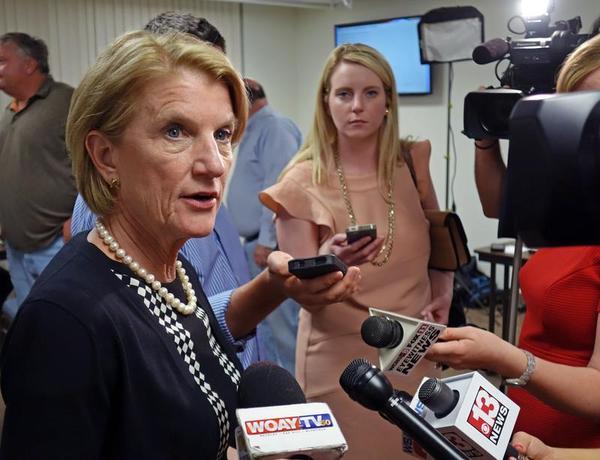 With just 100 days left until the election, U.S. Senate candidates Natalie Tennant and Shelley Moore Capito have taken to the airwaves in West Virginia, previewing their messaging strategies for the final months of the campaign in two new television ads.

Capito, who has served in the House since 2001, will begin airing an ad titled “Fighting for the Home Team” today. The spot focuses heavily on President Obama and new Environmental Protection Agency standards limiting carbon emissions, which are vehemently opposed by the coal industry.

The one-minute spot begins with Capito discussing Obama -- “who doesn’t seem to care” about working-class men.

“The president’s come out with rules that say no new coal-fired power plants,” Capito tells workers at an industrial plant. “But what he’s going to come out with in the next several months is you are not even going to be able to burn coal very limitedly in the existing plants.  And this is really going to hurt West Virginia.”

After a male narrator dings Tennant for backing Obama, Capito concludes, “He doesn’t understand that way of life.  And I want to go to the Senate and show him. This is the West Virginia way.”

The ad is consistent with the campaign’s overall strategy of nationalizing the race and focusing on Tennant’s relationship with the president, who is deeply unpopular in the state.

The Tennant campaign began airing its own spot on Monday, dubbed “Message.” Like her opponent’s ad, it focuses on coal.

“Where do they think their energy comes from?” asks Tennant at the beginning of the 30-second spot, which will run throughout the state for two weeks. “You and I know it’s our hard-working West Virginia coal miners.”

Tennant, who is shown standing in front of a coal plant, mentions her relationship with Sen. Joe Manchin, the state’s popular senator who has endorsed her. She adds that she will “stand up to leaders of both parties who threaten our way of life.”

The ad dramatically ends when Tennant declares, “I’ll make sure President Obama gets the message,” and proceeds to pulls a lever that shuts off electricity at the White House.

As of early Wednesday morning, the video has had more than 34,000 views on YouTube.

The RealClearPolitics polling average shows Capito with a 9.3 percentage-point lead over Tennant. The seven-term congresswoman has significantly outraised Tennant, West Virginia’s secretary of state, as well.

Adam O'Neal is a political reporter for RealClearPolitics. He can be reached at aoneal@realclearpolitics.com. Follow him on Twitter @RealClearAdam.